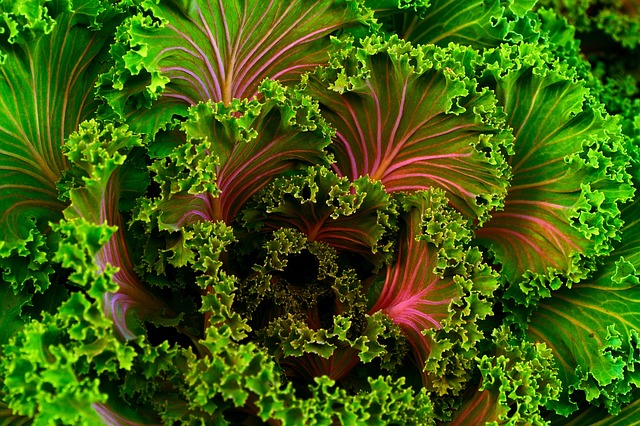 Compared to its more succulent cousins like cabbage and broccoli, Kale is often regarded as a “coarse” vegetable, suitable only for the winter garden. How untrue! The leaves are rich with Vitamin A & C, iron and calcium and the beautifully frilled Japanese varieties are an ornament in any garden and make a striking garnish on any dish. On top of that, kale’s ability to give tender greens in the early spring makes it a valuable commodity when no other greens are able to produce.

A member of the Brassica family, Kale is known botanically as Brassica oleracea variety acephala, which translates to mean “cabbage of the vegetable garden without a head”. Native to the Mediterranean, Kale has been grown as a leafy vegetable for thousands of years and is thought to be the ancestor of cabbage, kohlrabi, Brussels sprouts, and even the flowering brassicas such as broccoli and
cauliflower.

Kale is one of the easier Brassicas to grow since it doesn’t need to head like cabbage and doesn’t fall over, as Brussels sprouts plants tend to do. In fact, kale prefers a slightly lower fertility than cabbage since high nitrogen produces tender leaves that do not withstand frost well. Soil that has been manured and limed the previous year is perfect for growing kale.

Here on the West Coast, we usually start kale in early July so that they reach a good size before the first frost in October. Adjust your starting date accordingly. The plants should be spaced a minimum of 1 foot apart but will grow in more crowded conditions. However, the more room you give the plants, the more they will produce. Most plants
mature between 50-80 days.

Although kale is cold hardy and can survive temperatures as low as 0 F, if mild weather is followed by a sudden freeze, it can kill the plants. Cover your plants with a floating row cover or a cloche and mulch around the plants to protect them against freeze-thaw cycles. If temperatures do go below 0 F, you can bury the plants in mulch. Brush the mulch aside when you need to harvest.

Like most winter vegetables, the taste of kale improves after the first frost. Here’s a tip: when harvesting, cut the leaves growing from the center of the stalk. The larger ones at the bottom tend to be tough while the younger ones at the top are next week’s harvest. By about late December-early January, my kale is looking a bit tatty. However, as temperatures begin to warm up in March, a new flush of leaf growth appears on the plants and I’m picking again. At this time, I like to fertilize with either fish emulsion or compost to encourage more growth. By about April, the plants begin to send up flower shoots. Don’t fret! These flower heads have a mild broccoli taste and if you break off the flowering head completely, side shoots will appear like in broccoli.

In his book dated 1885, Vilmorin listed 26 varieties of kale including leaf kales, tree kales, and marrowstem kales. Few of these varieties are still around today although heirlooms such as “Lacinato” are making a comeback thanks to seed saving groups. Most kales varieties belong to 1 of 4 types: Scotch (very curly leaves), Russian (flat leaf, serrated edges), Japanese (ornamental rosette types) and Other – (Lacinato, walking stick etc). Here is a list of some of my favourite varieties:

Few insect pests bother kale. Slugs and aphids can be hosed off easily on this sturdy plant. Imported cabbageworm seems to be the only pest that will do serious damage to kale. Handpick the worm or prevent the butterfly from laying its eggs by using a floating row cover. Otherwise, spray with BTK for an organic treatment.

Arzeena Hamir is an agronomist and President of Terra Viva Organics. When she’s not planting peas or picking zucchini, she answers questions about organic gardening at: advice@tvorganics.com. You can also read her gardening articles on Vegetable Gardening at http://www.suite101.com/