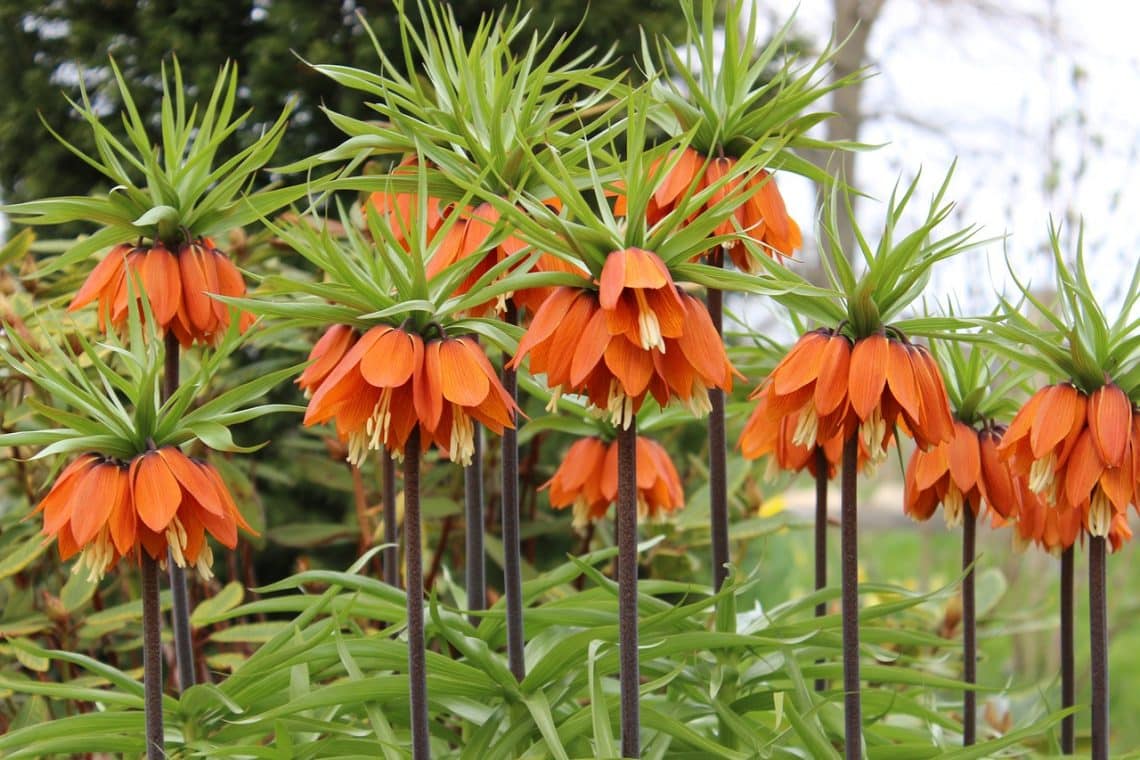 These are less common spring-flowering bulbs that you plant in the fall as you would the more common daffodils and tulips.  Their flowers come in a range of colors, and are generally bell-shaped, either in clusters or single.  Plants range from six inches to three feet or more.  Being less common, you may need to order many of the selections, either online or from mail-order bulb catalogs.  Most grow into USDA hardiness zone 4 (average annual -20 to -30 degree minimum).

The most common fritillary is the crown imperial (Fritillaria imperialis).  You may have seen its basal rosettes of narrow, long leaves, from which the tall stems emerge in late spring.  Atop these three-foot stems are clusters of up to ten flowers with a small tuft of leaves protruding from the top.  (Flowers remind me of something one might see in a Dr. Seuss book.) Generally bright red-orange, you also can find less common selections with yellow or light orange flowers.  The huge bulbs (often four inches wide) are strongly scented, similar to fox or skunk, and so are used to repel rodents from the garden where they are planted.

Being large, crown imperials need planting about six inches deep and eight or more inches apart.  They need well-drained soil, or they’ll rot.  Bulbs have a slight depression in the top, which can collect water when the soils are wet.  To prevent this, plant bulbs slightly on their side.  Since this bulb is less hardy (USDA zone 5), you may plant and treat this as an annual bulb in colder climates.  This fritillary, as with its relatives, doesn’t like to be out of soil for long so plant them right after you get them.

As with many fritillaries, these are originally native to the eastern Mediterranean and central Asia.  This also is one of the oldest fritillaries in cultivation, dating back to 1590.  It was then that a man named Clusius brought some with him (along with some of the original tulips) to the botanic garden in Leiden, Holland, from which they were introduced. Since he had been the head gardener at the imperial gardens in Vienna, these bulbs got the name “Crown Imperial.” This plant is a magnet for the bright red lily leaf beetle and its ugly larvae so, if you have this pest, you may need some neem-based organic spray.

Perhaps the next most common fritillary, one that you often can find at local garden stores along with the crown imperial, is the guinea hen flower (Fritillaria meleagris).  It also is known as the snake’s head fritillary, or checkered lily, due to the purple and white checkered pattern of the flowers. In fact, the name of this genus (said as “frit-ill-AIR-ee-ah”) comes from the Latin word for dice-box, referring to the checkered pattern often found on these. Another common name is leper lily, referring to the bell shape of the flowers, similar to the bells lepers carried in medieval times. A mix of these bulbs often is found with white flowers as well.

Checkered lily often is found naturalized, growing in huge masses, in moist meadows of northern Europe and Scandinavia.   Similarly, in the garden it is most attractive when planted in groups of six or more  Above the very thin leaves, the flowers are single on stalks only about one foot high.  Although the fritillaries are usually listed as deer, rabbit and woodchuck resistant, I have found this species eaten to the ground by such creatures!

The Persian fritillary (Fritillaria persica) is probably the third most common and is rather unique and attractive.  It has strong, upright stems to over two feet high.  Up the stems are wavy, bluish leaves.  Near the top are many small, hanging bell-shaped flowers.  Generally plum colored, a less common selection has white flowers.  As with most fritillaries, this one prefers full sun.  Similar to the crown imperial, this one has been cultivated since the late 1500’s.

A recent selection of the Persian fritillary, rather rare and expensive but quite showy, is Ivory Bells.  It grows up to about four feet high, with larger, ivory-colored flowers. Similarly new and rare is Purple Dynamite Persian fritillary. This sport of the species has glossy, mahogany garnet-colored flowers.  With mahogany-plum flowers, similar to the species, only with two stalks per bulb is the new Twin Towers Tribute (named in tribute to these structures).

One of my favorites of the less common species is the Assyrian fritillary (Fritillaria assyriaca).  It gets over a foot tall, with narrow bluish leaves up the slender stems.  Atop each stem are several small reddish bronze bells, with gold rims and gold insides.  I have these scattered throughout low perennials such as heathers and coralbells, above which they rise each spring.  Grown in gardens since 1874, this fritillary naturalizes well and prefers filtered shade.

A Turkish fritillary, Michael’s flower (Fritillaria michailowskyi), is similar to the Assyrian one, only shorter, and its flowers a maroon or reddish purple, with yellow rims and insides.  Another Turkish fritillary (Fritillaria pontica) gets to about one foot high, with large, greenish white flowers with brown edges.  There are one to three flowers per stem.  It prefers part shade. Similar to the latter is another fritillary (Fritillaria acmopetala), only taller and its flowers are olive green with brown insides.

A Siberian fritillary (Fritillaria pallidiflora), native to the Himalayan mountains and Asia Minor, is quite hardy and less common.  The soft chartreuse-yellow bells, with reddish-brown spots inside, are held about one foot high.  This bulb was first grown in gardens in 1857.  Another rare fritillary from central Asia and the mountains of Iran, the Turkmen fritillary  (Fritillaria raddeana), is similar to the crown imperial in hardiness and habit, only with more delicate pale greenish-white flowers.

There are even more fritillaries, which you can find in specialty bulb catalogs, to add spring color to your gardens, with some unusual bulbs that are relatively easy to grow. While some selections make eye-catching annual spring flower specimens, others make long-lived perennial spring flowers massed in borders or naturalized.