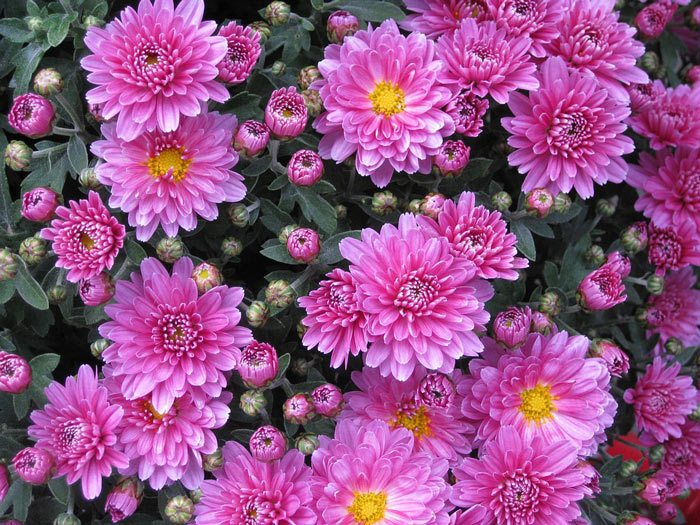 There are many kinds of chrysanthemums, some annual and some perennial. The garden annual group that blooms in late summer is easy to grow from seeds sown in open ground as soon as it can be worked. They are suitable for mass color effects. These should be thinned to 12 to 24 inches apart to provide the best blooms. The perennial border kinds bloom profusely in a wide range of colors even after other flowering plants have been killed by Frost. Planted in well-drained soil, they will grow for several years in most any climate if mulched during the winter. They are usually propagated by seeds (which produce flowers the second year), by division, or by cuttings of young, firm shoots. The florist’s mum group has a good many varieties that are perfectly hardy and can be grown in the home garden. There are several other kinds of chrysanthemums, including many plants often called daisies, that have a place in many home gardens.

SOIL PREPARATION: A light, rich, and above all, a well-drained soil, with lots of sunlight, is needed for growing good chrysanthemums. A good supply of plant food and humus should be spaded into the before planting.

PLANTING: For outdoor culture, plants may be propagated by cuttings of the stem, by division of the crown, and some varieties from seeds. Cuttings are easy to grow and the method requires no more special attention than most other plants. Stem cutting should be; taken early in the season when the plant has reached the height of four or five inches. Immediate re-planting of divisions of a lifted crown cut into 3 or 4 sections is a common means of propagation, since most chrysanthemums should be divided annually to keep plants fertilizers. Hardy types may be planted in either the fall or spring, although spring is the more suitable time since plants will have full summer growth established before cold weather. The distance between plants varies with type, but ordinarily, 18 to 24 inches will give sufficient space. The depth of the plants should be such that the soil comes to the top of the crown of roots. Always water plants well immediately after setting.

GROWING CARE: The method of growing all groups is essentially the same. Some protection is needed in the northern states during, the winter. Tall plants should be staked. Preferably the tips should be pinched off when the plants are small, and again later on to induce bushy growth. By pinching out some of the lateral buds larger terminal blossoms can be produced. Frequent cultivation and a feeding of fertilizer, 1 pound per 25 square feet prior to blooming, are necessary to produce a prolific bloom.

INSECTS AND DISEASES: A number of insects, especially aphids, as well as several fungus diseases, such as rust, mildew, and blight, are commonly found on chrysanthemums. The regular use of chemical Dust that controls most chewing insects, sucking insects, and fungus diseases, will stop damage before it gets started. In cases of bad infestations of disease, remove infected leaves to increase ventilation, water from below, not allowing the water to get on foliage, an dust with your leading brand every two or three days.

With just a few plastic bottles, you have a fresh vegetable garden to provide for your family
Master Gardeners Training Recap Week 5! :: The Joy of Vegetable Gardening 🌶🥕🥦
Everything you Need to Know About Tulips | GARDEN | Great Home Ideas
Sallie’s Pandemic Garden Project
flower garden. 🥰🥰