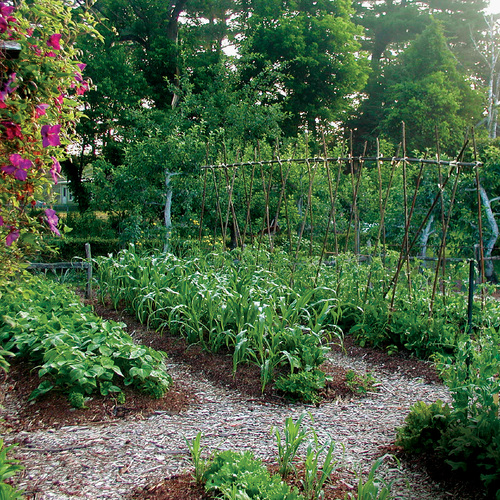 Today’s vegetable gardens may be Lilliputian compared with those of yesteryear, but new techniques return more bang for the buck in terms of space used and energy expended. Traditional gardens consisted mainly of widely spaced rows of plants. Instead, I suggest packing more into a space-challenged garden and reaping more from it using four different practices.

Add time to the growing season 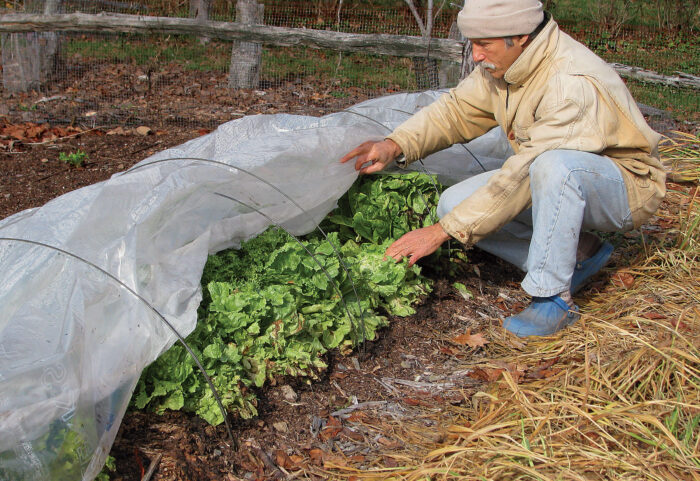 Cold soil delays planting, but there’s no need to wait while it warms. A dark cover, whether it’s compost or black plastic, speeds the warming process. Fluffy mulches insulate and delay warming in spring, so remove them.

Cold air also holds back growth. Warm the air at the beginning or end of the season with plant covers, which enclose individual plants, or cover whole rows of them. Coverings can include such items as fiberglass or plastic boxes, A-frames, or gallon plastic milk jugs with their bottoms cut off and fitted over a plant. Depending on the kind of cover and the daytime weather, venting may occa­sionally be needed so that the plants don’t “cook.”

Always be growing something 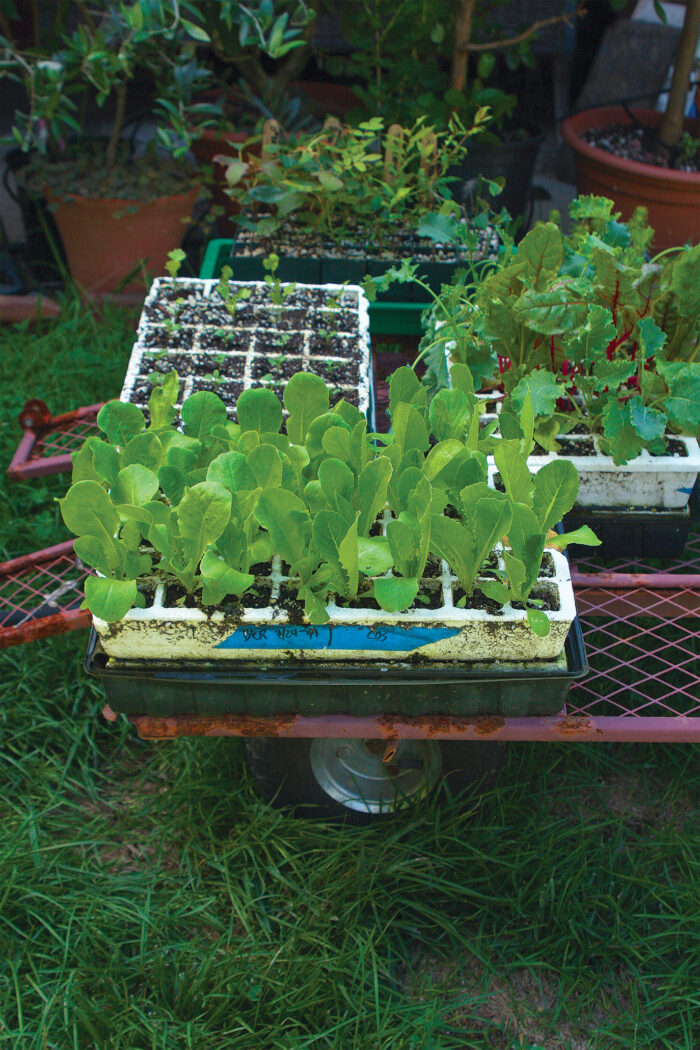 Few vegetables are in the ground from the beginning of the season to the end. There’s usually time to slip two or three into the same piece of ground in one season. With time slots in mind, I plant and harvest spinach, which loves cool weather, where tomatoes will reside after the spinach has vacated. Cabbage transplants can follow bush beans, which peter out by mid­summer. I’ve also followed early beets with late bush beans, as well as early lettuce with bush beans followed by late radishes.

Gardening outside of the garden is another way to trick time. Buy or grow transplants, which can grow huddled together in a minimal amount of space. Long-season vegetables, such as tomatoes and peppers, must be grown from transplants to reap a sufficiently early harvest, but few gardeners tap into this space-saving technique for, say, lettuce. By using seed flats, a square foot of space can house 25 seedlings. My first lettuces, started indoors in early spring, move out to the garden where I will later plant heat-loving plants. Lettuces sown in containers or in a holding area in the garden in midsummer are ideal for transplanting near the end of the season, when space becomes available.

Skip the rows in favor of beds 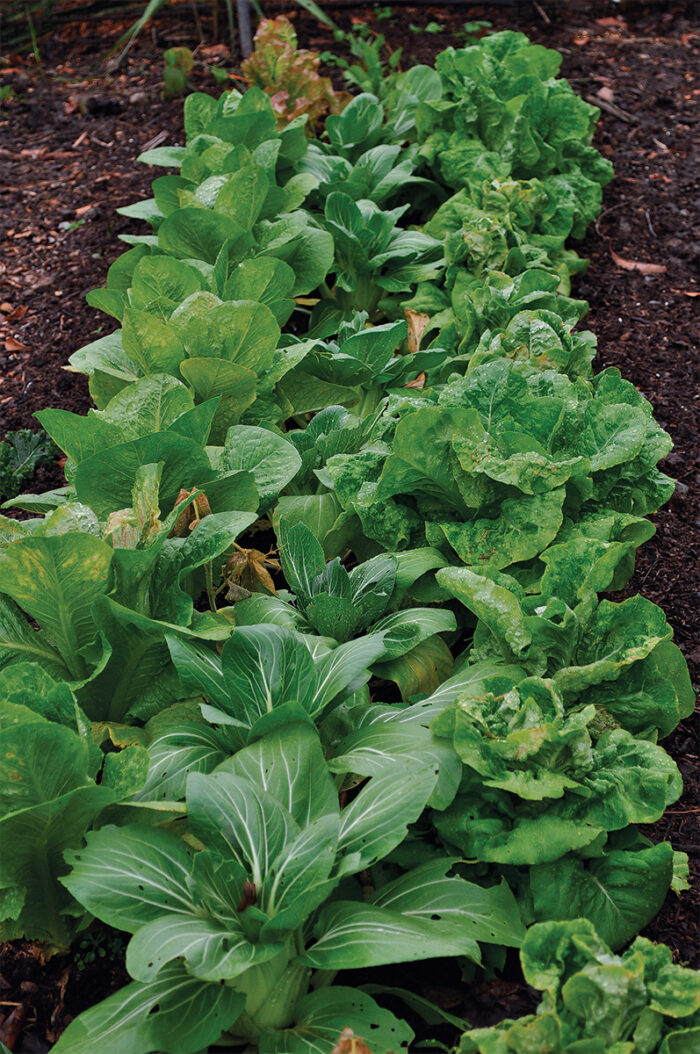 Planting in beds rather than individual rows allows for closer spacing, which means more abundant harvests. The 18-inch spacing between rows of carrots recommended in gardening books, for example, is to give the gardener space to work; carrot plants don’t need that much space. Plant, instead, five rows of carrots spaced a few inches apart; these rows can run down a 3-foot-wide bed in which work can be done with the gardener’s feet planted on an adjacent path.

No law says that any bed has to be devoted to a single vege­table at a time. Different vege­tables mature at different times and take up different amounts of space, so let them mingle. “Intercropping,” as this technique is called, works with many combinations of plants. Mingling broccoli and lettuce is a good example. Two lettuce plants spaced 8 inches apart can live between broccoli plants spaced 2 feet apart in two rows in a bed. This is more efficient than giving both lettuce and broccoli their own beds, leaving wasted space between the broccoli until neighboring leaves touch. By the time they need that space, you have enjoyed your lettuce.

There’s no need to restrict intercropping to two vegetables at a time. If you run a row of spring radishes up the center of that same bed of broccoli and lettuce, you’ll have three overlapping plantings in one bed. The radishes are harvested before the lettuces fill in, which are out of the way when the broccolis need more room. Experiment to find the combinations of vegetables that work best in your garden.

Grow up instead of out 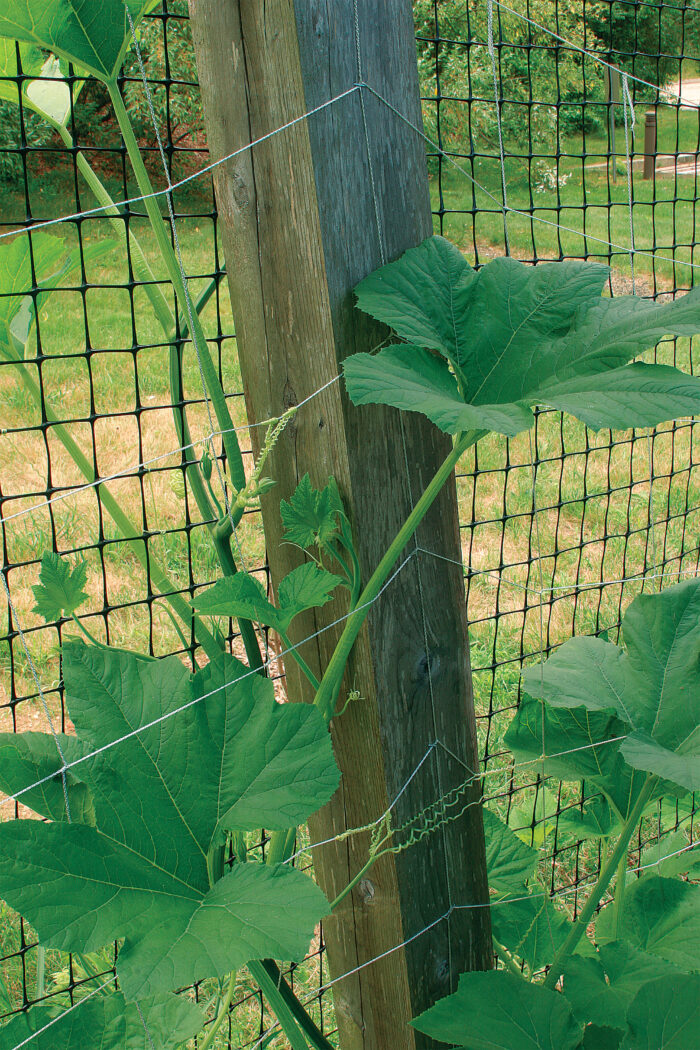 Grown on a trellis or stake, peas, cucumbers, tomatoes, and other vining plants can be planted more closely to other vegetables. I’ve supported plants on everything from bamboo stakes to cages made out of concrete-reinforcement wire. Most important is that the size and strength of the support is scaled to the eventual size and weight of the plant.

Think about using trellising in combination with intercropping, too. Early in the season, a temporary chicken-wire fence holds up my peas so that they can grow above the lettuce and onions. I’ve also kept early lettuce growing at the feet of tomato vines, which are held skyward by posts of metal conduit or bamboo. After the lettuce, basil takes the place under the tomatoes.